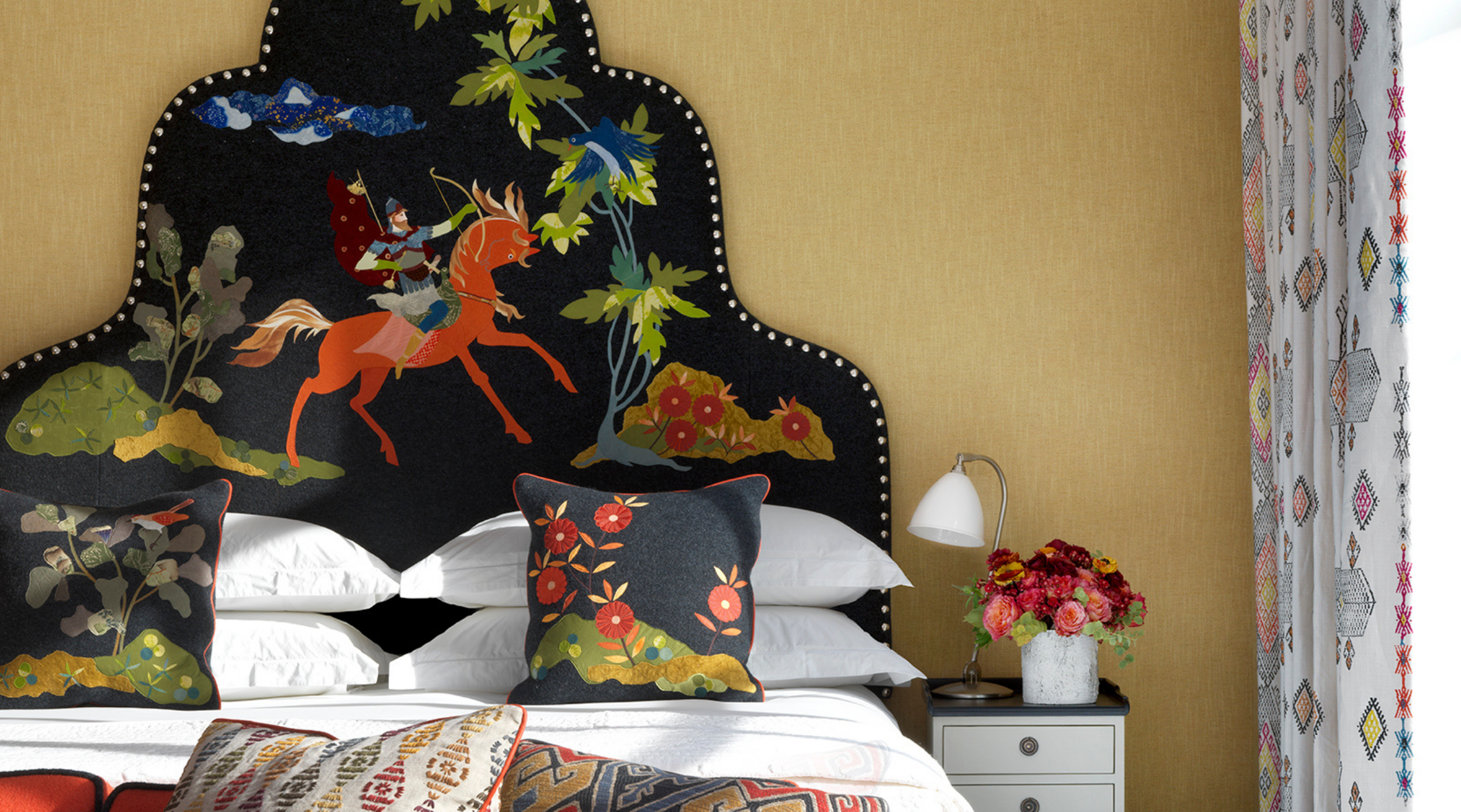 Deriving from French and Latin words ‘appliquer’ and ‘applicare’, which mean to join or attach comes the word ‘applique’. For all of us at the Design Studio, there’s a place in our hearts for this technique. Join us as we delve into the history of applique and celebrate the magic it brings to our interior designs.

Like many crafts, this technique had humble beginnings and was used to strengthen worn areas or patch holes in garments. Applique is similar to collage and is a creative way to sew pieces of fabric on top of each other to form a pattern or picture. The Egyptians were big fans of applique but it wasn’t until the Middle Ages that this technique was seen again, where it was commonly used for ceremonial costumes and banners for churches. Applique is found in many forms of Folk Art too. Gujarati Indian tents and temples were decorated in this way.

In the tradition of the Fon of Benin in Africa, friends and family would gather at funerals and display appliqued pieces of fabric to celebrate the deceased’s life and achievements.

Many different kinds of applique are seen in Native America. The unique style of ‘Mola’ developed by the Kuna tribe in Panama and on the San Blas Islands, is a style that particularly stands out. Multiple layers of fabric would be used alongside fine stitches, cut-outs and embroidery. These pieces would then be made into clothing, pillowcases, placemats or hung as art works.

Quilts are what often comes to mind when we think of traditional American crafts however applique was a big part of this too. It was used as a way of conserving printed fabric which was often scarce at times. The technique was called ‘broaderie perse’ and involved cutting small shapes from printed fabric and sewing them onto a solid colour-backing. If larger pieces of applique were used it was on a medallion style quilt with a motif in the centre and a star shape around it made with strips of fabric. There is so much that can be done with this simple and effective technique!

In the mid 1950’s the ‘poodle skirt’ saw the fashionable beginnings of applique in America. The felt skirt had an appliqued poodle design which then evolved into flower, flamingo and car designs. The hemlines were at the knee and everyone customised their own, making these skirts very popular for dances in the 1950s.

At our Design Studio we often use applique and find it an effective way to make statements. In bedrooms, headboards are a great way of introducing drama and detail. We have collaborated with very talented textile artists who create detailed applique and unique embroidered designs. One of our favourite artists is Kumi. Kumi is half Japanese and her mother sends over old and damaged kimonos which are transformed into her exquisite designs. If you look closely at these headboards, you can see a new level of detail, with a collage of fabrics which have been hand-dyed and block printed.

Covent Garden Hotel’s Room 215 has an impressive feel. With two tall windows, the proportions of this bedroom were crying out to play host to a bold and vibrant scheme. Enlisting the help of Alex Sherman, an inventive upholsterer with a particular love for applique leather, we set about with the exciting task of creating a bespoke headboard for the room.

Brumus Bar & Restaurant at Haymarket Hotel is named after one of Kit’s beloved dogs. In homage to her spaniel, we hand-cut and appliqued different breeds of dogs on the back of each chair and barstool.

In our lobby at Ham Yard Hotel you will find vibrant applique chairs. With cut-out abstract shapes, these chairs bring added character to the space.

At Shop Kit Kemp we have the Rhino Leo Chair and Rhino Pollyanna Chair which have been appliqued with a beautiful design of a rhino standing under a tree. These chairs know how to make a statement!

Our recent collection with Annie Selke includes hand appliqued and embroidered cushions, such as ‘Lily Pad’, designed in pink and cyan colours. See how to get the look or shop the collection, available from Shop Kit Kemp, Annie Selke and Andrew Martin.

Although no two rooms are the same at our hotels, you will find a signature Firmdale mannequin placed in all of our bedrooms. These Flower Power appliqued mannequins are a great way to include style, pattern and colour to any room.

Our Flower Power Tray is another way to celebrate the magic of applique, whilst enjoying tea and cake amongst friends and family.

Thank you for exploring the wonderful world of applique with us. If its magic has rubbed off on you, find our Design Threads: Applique blog post, where we have included 5 steps to help you create your own applique masterpieces. Remember, a personal touch will allow your interiors to tell a story!