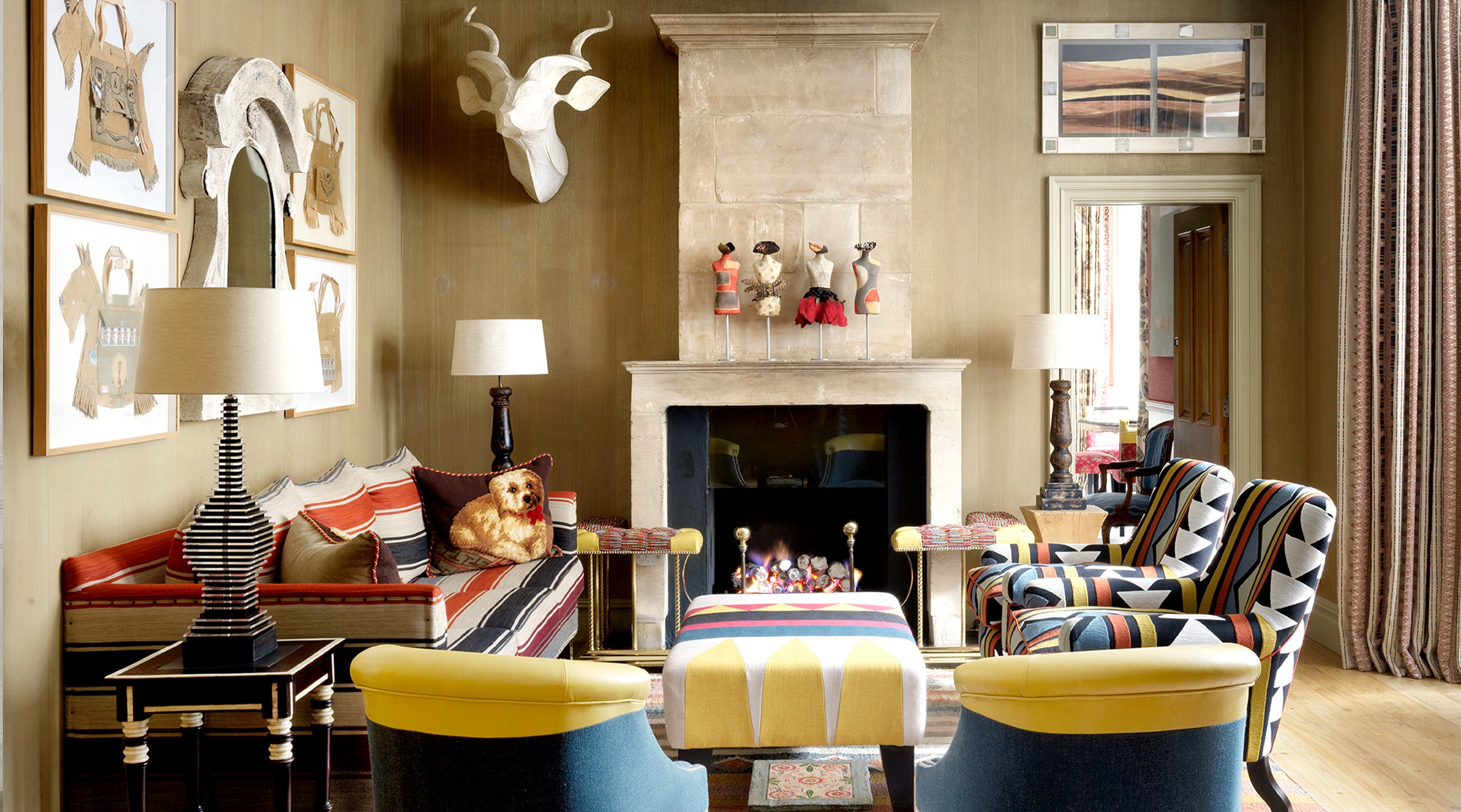 With the nights drawing in, what better time to get cosy in front of the fire. A fireplace can make any space feel like home and the best way to enjoy the warming glow of a fire is to install a club fender.

Club fenders are traditionally topped with a cushioned fabric panel, which is wide enough to perch on but narrow enough so that they are not intrusive within the room.

Club fenders are the best way to make the most of your space as they maximise the wasted area around the fireplace. Originally, they provided some warm seats in the days before central heating. Club fenders were traditionally used in the more ‘masculine rooms’ such as libraries, Billiard rooms and ‘club rooms’, where cards and other games were played by men.

As a female led design team, we’ve ripped up the rulebook and introduced this feature to some of our favourite schemes. So take a seat beside the fire and let us show you the wonderful ways club fenders can be used.

A sumptuous scheme greets you in The Whitby Hotel’s Drawing Room, with warming wools on the upholstery and walls lined in a swirling Casamance fabric. The fireplace is a mid 18th century Greek style and features garlands of leaves and acorns tied by ribbons, representing prosperity and longevity.

In front of this stone mantelpiece is an electric blue leather covered fender which cleverly picks out blue details within the scheme, from the piping on the back of the large cosy armchairs covered in my ‘Friendly Flowers’ fabric for Chelsea Textiles to the spines of the books on the shelving above.

Fenders are a unique way to introduce a bold pop of colour, this design really makes a statement.

Our leafy townhouse hotel is traditional on the outside, with its classic London façade and towering pillars, yet inside a beautiful hum of colour and texture awaits you.

The Drawing Room is anything but traditional. A fun assortment of earthy toned fabrics in wide stripes, geometric shapes, block colours and intricate weaves make up this scheme, grounded by the sandy toned walling.

In front of the fireplace is a deep-buttoned fender, covered in a tiny embroidered design by Zimmer & Rohde. The fabric encapsulates nearly every other colour in the room, and brilliantly ties the scheme together. We have capped the fender in a soft yellow leather. These blocks of lively lemon yellow add a zinginess which prevents the other fabrics blending into one another.

Next door is the hotel’s library. This space is a gentle swoon of playful primaries in blues, reds and yellows. The walls are covered in a stunning soft rusty red linen. Two white bookcases are filled with novels from times past, their ageing spines flecked with gold stamps.

A pair of large roll armed sofas flank the fireplace, where a sunshine yellow leather fender guards the space. This pop of yellow is a fantastic addition, picking out the tiniest details such as the yellow spots on the silk lampshades, the fabric on the sofa cushions and even the minute aspects of yellow in the curtain fabric.

Across town is Covent Garden Hotel, which is certainly our Grande Dame. The wood panelling in the Drawing Room was salvaged from the League of Nations building. It is a maple wood which creates a warming feel no matter the time of year.

This room transports you to times gone by, with a collection of traditional needlepoints and embroidery, weaves and wools, antique lighting, rich tapestries and large gilt framed oil paintings.

There is always a log fire burning in the grate, surrounded by a kilim covered club fender. Found fabrics will always create an impact as they are entirely unique and rich in storytelling.

Leading off this room is Tiffany’s Library, which feels like the perfect hideaway. Rich leathers and heavy wools make this a beautifully cosy retreat, whether you are curling up with a book or having an informal meeting.

The carved stone fireplace is punctuated by a more modern pop of eau de nil and raspberry reds on my ‘Lost & Found’ fabric on the two large wing armchairs. A pretty patterned Soane fabric on the cushions and roman blinds, pairs with the soft blues on the fender. A block stripe design was used combined with a fun red strip of leather to tie the scheme together.

Keep an eye out for club fenders at flea markets or we would recommend Robin Gage, they really are a worthy investment…We welcome you to the club!