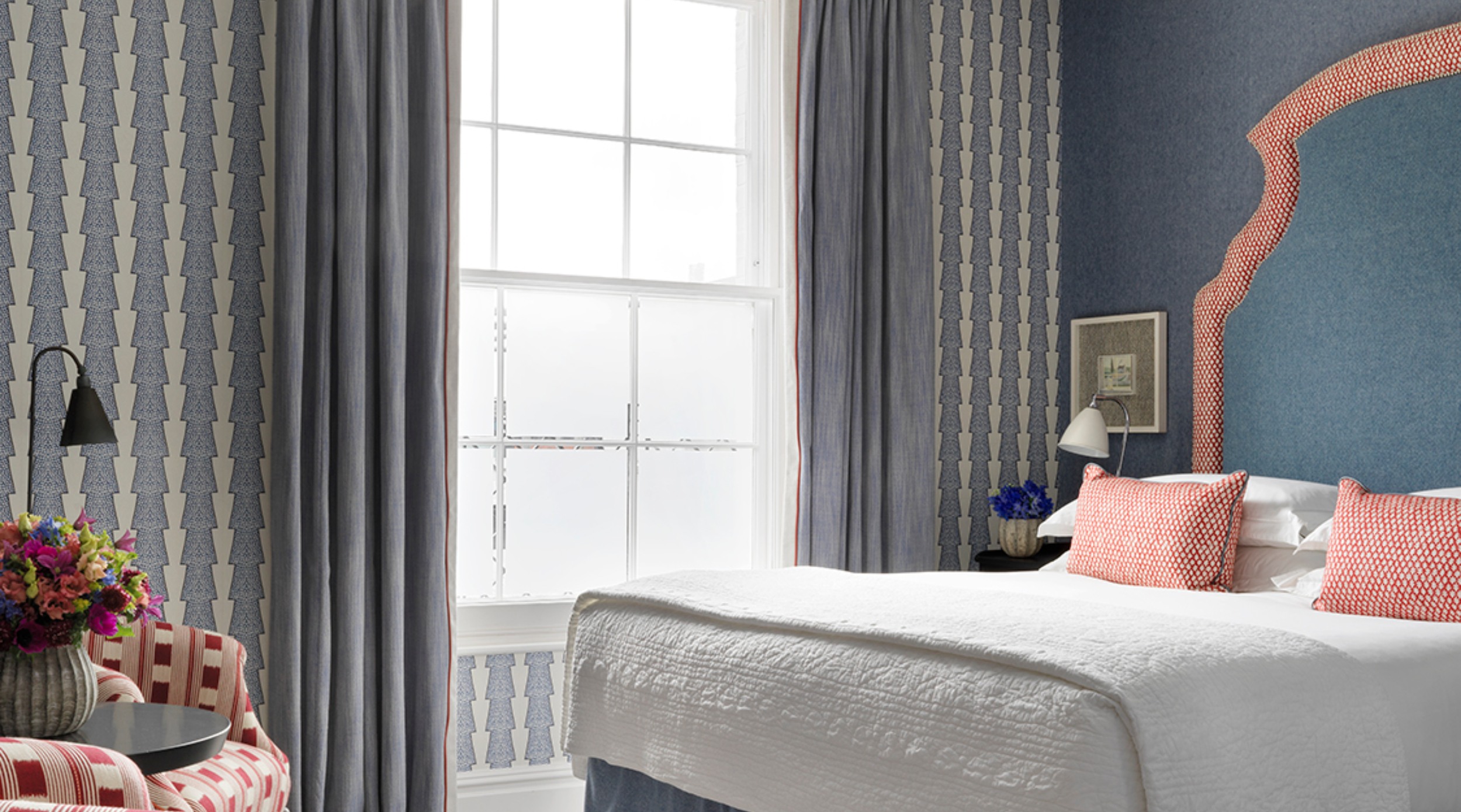 During lockdown we provided a few lucky rooms with mini makeovers and others have been given full refurbishments, which we can’t wait to show off.

This week for Sleeping Around we thought we would give you a sneak peek at one of our newest and freshest rooms at Dorset Square Hotel – Room 206.

A lovely light bedroom with a large window looking out onto the streets of Marylebone, this scheme has a more masculine feel with its tailored and refined red, white and blue colour palette.

When designing this bedroom, we really wanted to highlight the beautiful floor-to-ceiling Regency window. To do this we used Ottoline’s “Spot and Arrow” wallpaper. The jagged, arrow stripe is not only a fun design but it tricks the eye into thinking the ceiling is higher than it is. We often include a striking feature wall in our designs to bring the space to life.

To dress the window, we have used a plain blue linen by Romo and down the leading edge is a crisp white linen, also by Romo. Dividing the two fabrics is a tomato red leather pipe, which gives the curtain a sharp finish. When using a patterned walling it is usually best to have plain curtains instead of another pattern, especially in a smaller sized room, otherwise the varying patterns can be overwhelming to the eye.

The main walling for the bedroom is a plain navy linen by Osborne & Little. It’s a strong colour and works perfectly in a room which floods with natural light. The headboard is a combination of two fabrics. The central panel is Parquet by Abraham Moon in the denim colourway, which is incredibly soft and durable. This same wool has also been used on the bed valance, as it falls well and doesn’t crease like a linen would. Notice how we have used different shades of navy on the headboard and the walls. This lends depth to the space and gives the room an extra dimension.

The surrounding border of the headboard is a cotton textile by Sister Parish called Burmese Fabric. We love how such a little print has such a big impact. As usual we have added nickel studding around the outside and inside edge of the border to give it that tactile quality. The Burmese Fabric has been repeated on the bed cushions to create a sense of fluidity.

Opposite the bed are two tub chairs which have been upholstered in Kit Kemp’s Lost and Found fabric, a lovely soft weave that is perfect for upholstery. This is one of our favourite fabrics we designed for Christopher Farr Cloth. We love the structure and the small repeat of the dotted stripe.

We wanted to accentuate the height of the space, so we asked our upholsterer to recover the tub chairs so that the Lost and Found fabric would run vertically in the same direction as the Ottoline stripe on the feature wall. By doing this, everything looks taller rather than wider.

Room 206 is wonderfully light and the perfect room to relax in. We can’t wait to open our doors again and for you to come and stay!