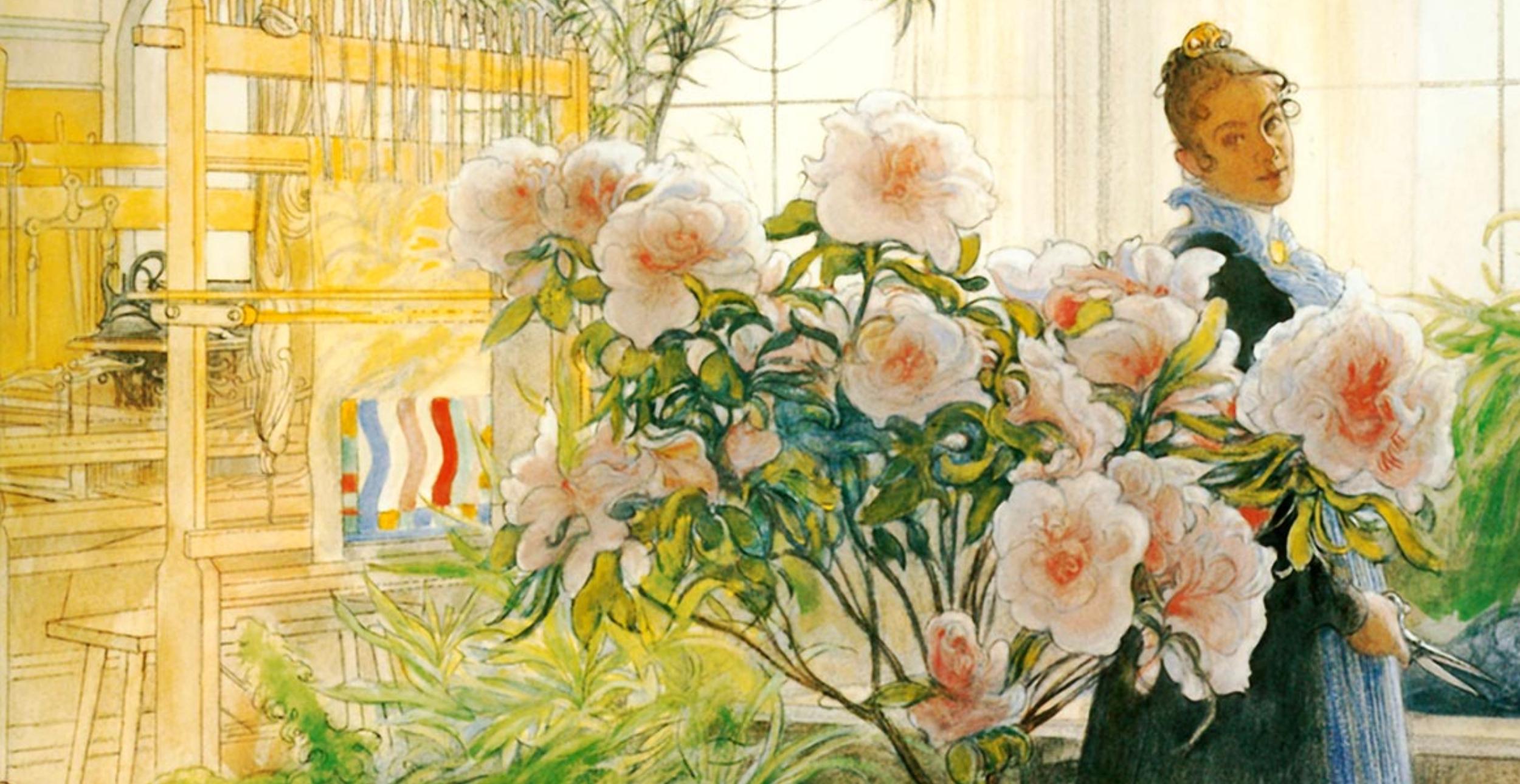 I recently received a lovely email out of the blue sending love from an old friend and asking whether my designs have been influenced by Karin Larsson. I had to say that I was not aware of her work, but I was intrigued and upon researching I discovered the story of the artist couple, Karin and Carl Larsson, and their home known as Lilla Hyttnäs located in Karin’s hometown Sunborn in Sweden.

The couple met in 1883 at a Scandinavian artist’s colony in France, before returning to Sweden to marry and start a family. Carl Larsson became a celebrated Swedish painter and Karin studied handicrafts at the Royal Swedish Academy of Arts in 1887. Women were able to train to be artists, but female artistry was usually seen as a mere pastime, to be abandoned when a woman got married.

This was true of Karin and she gave up professional art to devote herself to her family. She didn’t stop being creative, however, and domestic life became her medium of self-expression. Her home became her canvas. Her brush was replaced by needle and thread. Her painter’s palette became woollen threads and silks. She created a home for her family, so full of joy and character and design that we can still learn from today.

Lilla Hyttnäs was a far cry from the Victorian style interiors that were popular in Scandinavia in the early 19th century. Refusing to follow convention, Karin used motifs inspired by Swedish folk art traditions. She also took inspiration from the arts and crafts movement in Great Britain and even the 19th century fascination with Japonisme, which is when Japanese ukiyo-e prints started to become available for export to Europe.

Karin’s joyful interiors and children soon became Carl’s favourite subjects for his paintings and they had great influence on his work by tempting him to move away from dark oils to more illuminating and light-filled watercolours.

We can learn so much about the context of Karin’s work through her husband’s paintings that depict their beautifully contrived home. These are such joyous scenes showing a vibrant and loving family life. Take some time to admire the compositions and insights into their lives from a pre-instagram era.

Karin’s work eventually came to the forefront when the first major exhibition of their work outside of Sweden opened at the V&A in London on 23 October 1997. It focused on the famous house they created at Sundborn in Sweden and its extraordinary impact on interior design world-wide over the last century.

The following text is taken from the exhibition:

”Karin was Carl Larsson’s muse. So thoughtful and quiet, he portrayed her as his idol, forever young. She was, in fact, hard-working, hard headed and highly creative. Carl relied upon her as a critic of his work. She trained as a painter at the Academy of Fine Arts in Stockholm and Paris. After the birth of Suzanne in 1884 she turned her artistry to decorating the home, especially to weaving and embroidery. She also designed furniture and her own and her children’s clothes. Her most creative period was between 1900 and 1910.”

This colourful artist couple’s house is perhaps Sweden’s most famous home and has become an icon for Swedish interior design.

Immortalised in the watercolor paintings by Carl Larsson, the artistic couple’s light, colourful style has had an iconic impact on Swedish interior design since the late 19th century. Lilla Hyttnäs, located in the idyllic village Sundborn, is open all year round to visitors.