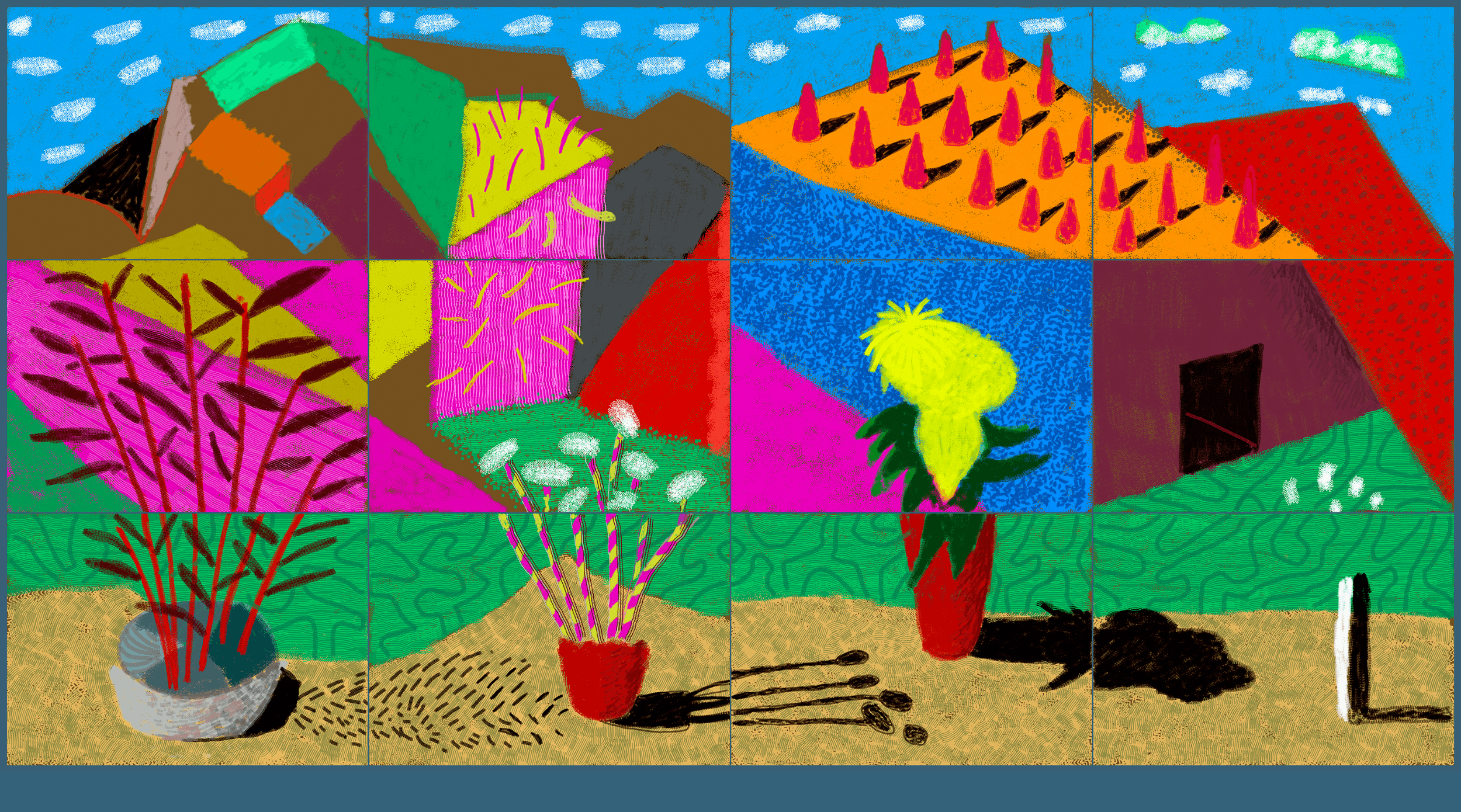 We’re going ‘Out and About’ in New York and London this week. Join us as we highlight some exciting new exhibitions…

At Pace Gallery in Chelsea, New York, you can find David Hockney’s 20 Flowers and Some Bigger Pictures. This exhibition has been making its way around the world and will be presented in five galleries:

Hockney’s series of twenty flower iPad paintings capture various arrangements of blooms set against a backdrop of gingham tablecloths and burgundy walls. “I was just sitting at the table in our house, and I caught sight of some flowers in a vase on the table. A few days later I started another from the same position with the same ceramic vase. This took longer to do. I then realised if I put the flowers in a glass vase the sun would catch the water, and painting glass would be a more interesting thing to do. So then I was off”.

The larger pictures are Hockney’s landscapes which are reimagined with bright colours and abstract forms, transforming traditional outdoor scenes into imaginative and impossible realities. Individual iPad paintings on panels have been put together to create the larger landscape. The edges don’t perfectly line up, which adds movement and depth to the overall image.

This exhibition is open at Pace Gallery until 25th February 2023.

Chilean artist and poet Cecilia Vicuña has created a poignant new artwork for Tate Modern’s Turbine Hall. Soft sculptures at the opposite ends of the hall drop from the ceiling at 27 metres high. Consisting of an array of materials and pieces, they are reminiscent of fishing nets with various items collected along their trail.

The artworks are accompanied by audio and digital aspects to emphasise the installation’s important message: “The Earth is a brain forest, and the quipu embraces all its interconnections”, Vicuña says.

Similar to Magdalena’s works, Vicuña’s creations are activism for Indigenous cultures and environmental issues. Quipu was a 5000-year-old tradition in the Andes of spreading the word and sharing stories. Andeans did not write but wove their messages into nets, knots and textiles. Quipu has a grander, spiritual meaning, a poem in space, a connection between the body and cosmos, and a symbol of the union of all.

This installation is on show at Tate Modern until 16th April 2023.

We hope you’ll get to go ‘Out and About’ in New York or London soon. Find more of our exhibition suggestions in our blog post: Out and About: Art to See in 2023.