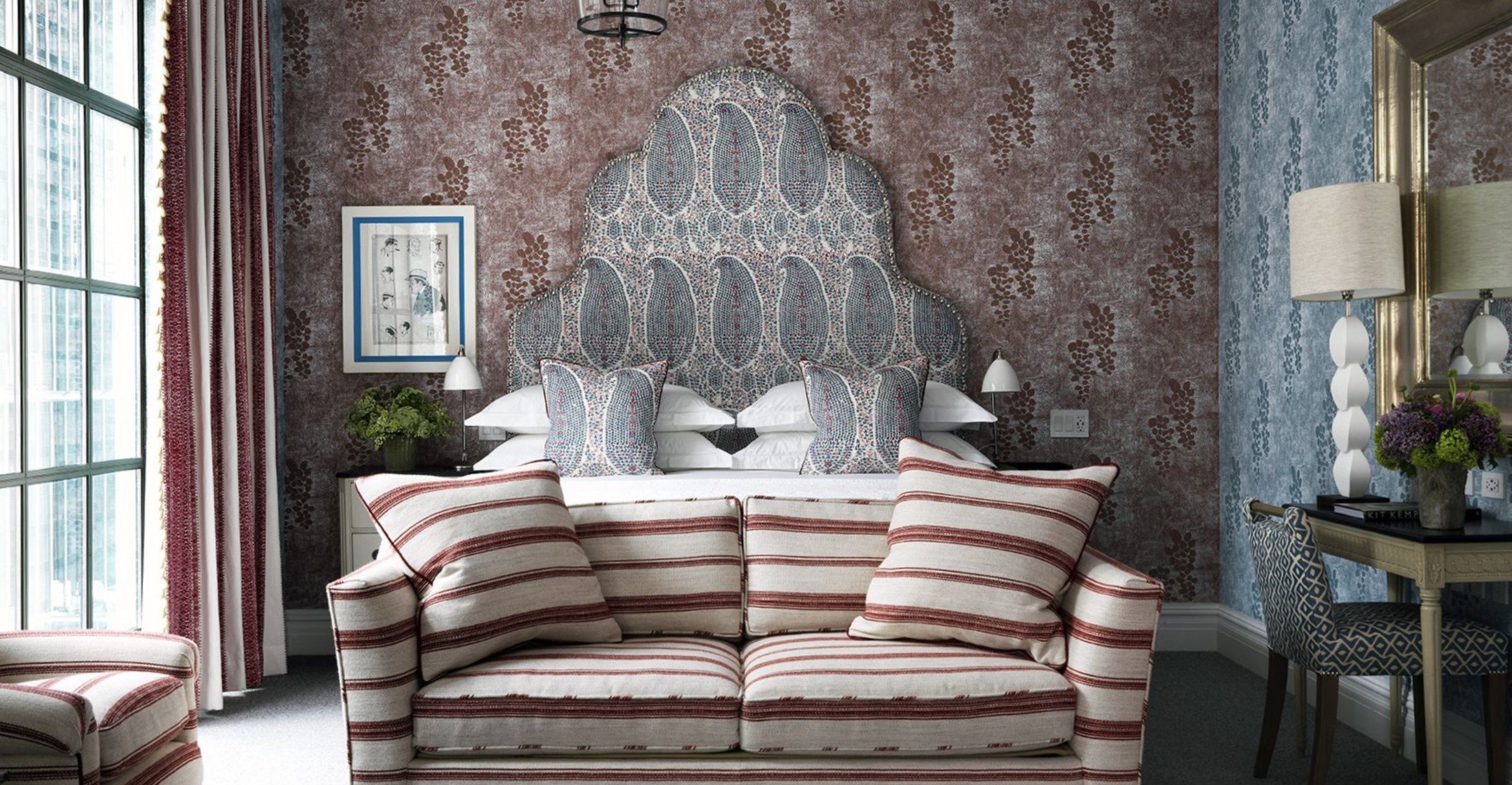 It is sometimes said that rules are made to be broken and I would be lying if I said that I don’t like to break rules on occasion.

More often than not, taking a leap of faith and thinking outside the box can reveal new possibilities that you didn’t know existed. I am sure many great discoveries have been made thanks to the brave people who broke one or two rules along the way.

1. There are rules when it comes to proportions

Proportions are important, but you can also play with them to achieve striking results. Over-scale items can be extremely effective in specific contexts, and if used well they can make the space bolder or bigger.

As you enter Ham Yard Hotel you are met with a graphic painting by Juliette Losq. The painting is much bigger than the console underneath and if we had followed the rules it shouldn’t be. But, as the wallpaper and painting are bold enough, you don’t notice that the proportions have been played with. It makes the space feel grand and adds to the sense of arrival.

2. A fireplace should be used or it shouldn’t be installed

We add so many elements to our designs just for the pure pleasure of looking at them – so why shouldn’t faux fireplaces be allowed?

I love a fireplace. It grounds a scheme and they create a cosy feeling in our entrances, libraries and drawing rooms. In most of the hotels they can’t be working fireplaces, but we have found a way of imitating their warming glow with an electric flame.

In some cases, the fireplaces are not in use at all, but in their place we have added candles which makes them look much more inviting.

A fireplace provides an excellent focal point for a room and it shouldn’t be something that we have to renounce if used cleverly.

3. You can’t put the cart before the horse

I have bought so many items for a hotel before the foundations had even been laid… chandeliers, giant baskets and even sculptures! Sometimes this can work in your favour – our larger than life Botero cat at The Soho Hotel was placed in position before the hotel was built and the walls were built around him. That was fortunate, because otherwise it would have been almost impossible to squeeze him in through the door!

We are currently building our third property in New York and I must say that it has been challenging. However, we have never stopped dreaming about it and visualising it. Our warehouse is full of exciting items that will be placed there.

4. You can’t mix too many patterns

We believe there is a difference between mixing patterns to create an exciting and layered interior and mixing them in a way that creates a busy and frantic design. Finding the perfect balance is challenging, but when it is achieved it is a genuine triumph.

At The Whitby Hotel, the powerful paisley fabric of the headboard is the main focal point of this room, but instead of keeping it simple we decided to combine it with my Mud Print wallpaper in not one, but two, different colourways. A bold striped fabric on the sofa adds yet more variation to the scheme.

5. Classic ornate antiques and rustic objects do not work well together

We all agree that mixing elements is vital in any interior. It adds depth and layers to the room and will make it interesting. I am not a big fan of interiors where all the furniture looks as if it comes from the same shop.

There are certain very ornate pieces that need to be next to a non-elaborate piece to look even more elegant. At Haymarket Hotel, we have paired a baroque console and mirror with rare wooden totems. It is the contrast that makes it informal but chic at the same time. If we had added more gold pieces, they would have fought for attention within the room rather than creating a harmonious and unified look.

The same applies to this area of the drawing room at The Whitby Hotel. The console and the mirror create such a powerful moment together that not much else is needed around them. I love the table with the organic ceramic pots next to it, combined with the modern and textured fabrics of the room.

During my career, I have always encountered people been telling me that something that I wanted done was not possible, it wouldn’t look right, or it simply wasn’t the ‘done’ way. However, here we are with a collection of rules that CAN be broken.

So do not be discouraged – rally against convention, follow your instincts and create your own rules!