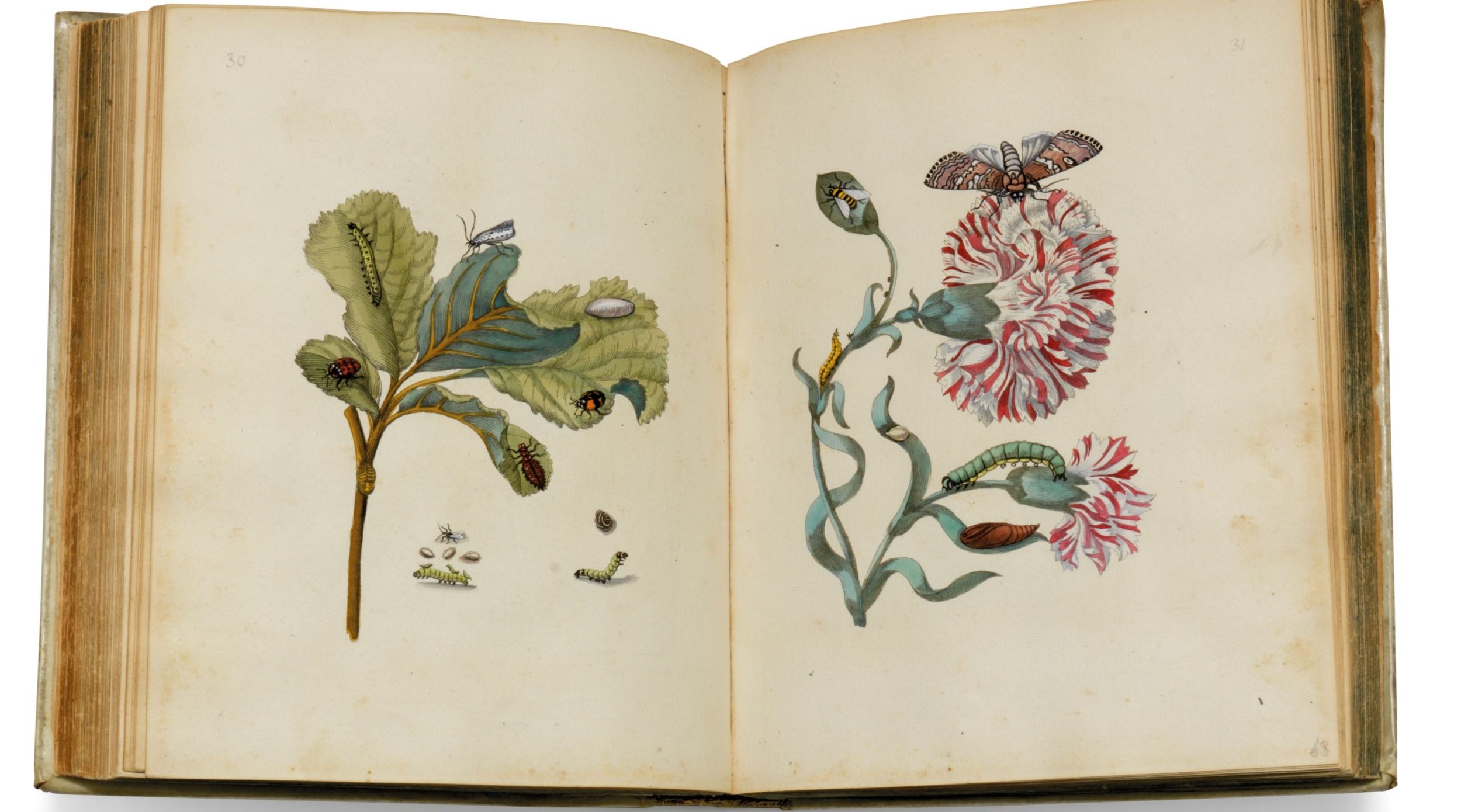 When choosing a fabric for a really special interior, my first stop is often Chelsea Textiles. Their hand embroidered designs in the most sensitively coloured threads are exquisite.

One fabric that stands out is the ‘Maria Sibylla’ design. Just look at the detailed bunches of flowers, they are a work of art in themselves.

Fascinated by the complex embroidered design, I had to find out more. Mona Perlhagen from Chelsea Textiles explained that she first discovered this dress on display at an exhibition in Sweden. Mona recognised the motifs on the dress as illustrations by the extraordinary naturalist and scientific illustrator, Maria Sibylla Merian. Chelsea Textiles hunted down the owner and persuaded him to sell them the dress!

The dress was made in the 18th century by an embroiderer who copied the motifs directly from Maria Sibylla Merian’s ‘New Book of Flowers’.

Chatsworth House borrowed the dress for an exhibition to show alongside some of Merian’s original books displayed in their library, it was stunning.

Intrigued, we found out more about the illusive Maria Sibylla Merian and we were truly inspired by her achievements. The story of her life is inspirational and her legacy is artistic as well as scientific.

Maria Sibylla Merian was born in Frankfurt in 1647, the daughter of a printmaker and his second wife. By the standards of the time, it would be fair to say that she was destined for an unremarkable life involving marriage, children and being a tutor. However, against the odds, Maria Sibylla Merian created important scientific publications and for the next 200 years her work would be debated and discussed in the highest academic circles. It is argued that she was the first ecologist.

Maria inherited her father’s artistic talent and began to paint still life watercolours of flowers, which were deemed suitable for female artists at the time and would enable her to earn an independent living.

In 1665, Maria Sibylla Merian married and moved to Nuremberg, where she began to teach flower painting to wealthy young women. In 1665, her first book on flower patterns was published, featuring beautiful compositions intended to be used to inspire embroidery and watercolours designs.

Maria Sibylla Merian forged forwards by embarking on ontological research and prepared to publish her results. She worked in the cutting edge and groundbreaking subject of insect metamorphosis. Fascinated by the silkworm metamorphosis, she collected caterpillars in her garden to watch and record in her notebook.

In 1679, Maria Sibylla Merian published her contribution to a scientific breakthrough proving how caterpillars transformed into butterflies, depicted with elegant still life compositions and accurate scientific descriptions. It was such a success that she published a second part.

In 1691, she made her way to the centre of a thriving artistic and scientific community, Amsterdam. Being a port city, exotic specimens were often imported. Maria Sibylla Merian marvelled at their beauty and wanted to find out more.

She sold the contents of her studio and with her daughter, took the long, arduous and expensive journey to study insects in wild Suriname. The hot and humid Suriname was full of natural beauty.

Maria Sibylla Merian was not confined to her garden, instead she explored along the river and in the high mountainous landscape, finding creatures to record at each stage of their development. She described how butterflies’ wings looked like roof tiles in detail when looked at under magnification. She used gold paint in illustrations to depict them.

After falling ill in 1701, Maria returned to Amsterdam and wrote up her research for publication, the scope of which was her most ambitious and lavishly illustrated, with still life drawings showing complete life cycles. It was a landmark in natural history and an important work of art too.

Maria Sibylla Merian died in 1717. Appreciation of her work continues to the present day and it is featured in all major scientific libraries across Europe. Her story is one of monumental perseverance and enthusiasm. She was a pioneer who never took the easy route. I would have loved to sit down with her and talk about her work.

The Chelsea Textiles fabric, ‘Maria Sibylla’, is a work of art and a wonderful way to celebrate her life and achievements. This bedroom with a sumptuous four-poster bed, complete with scalloped detailing and romantic curtains is my ode to Maria Sibylla Merian.

The contrast red lining fabric gives the bed depth and acts as a backdrop to the headboard. A scattering of Chelsea Textiles hand embroidered botanical cushions is a fitting contribution.

Finally, here in the Meadow Suite at Crosby Street Hotel, is an embroidered dress framed in a Perspex box, inspired by Mona Perlhagen’s dress illustrated with Maria Sibylla’s flower watercolours.