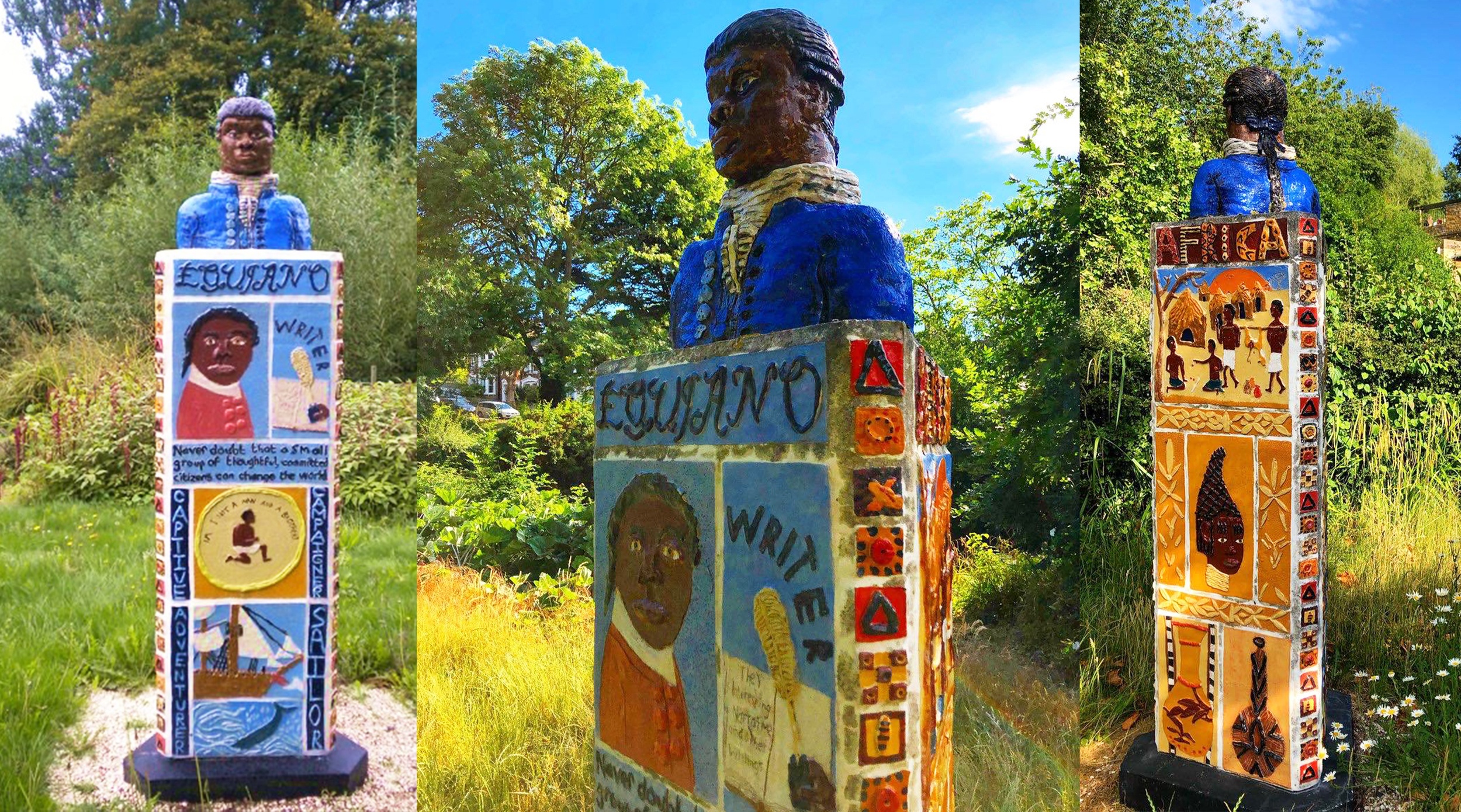 We’re living in exceptionally powerful times. If you feel you need a break from the deluge of news reports, we highly recommend a calming walk to the leafy grounds of Telegraph Hill in London, just a 10-minute overground train ride from London Bridge.

There, placed amongst beds of African plants, you will find the bust of an 18th Century writer and abolitionist, Olaudah Equiano. This powerful sculpture was created by the local children of Edmund Waller School with help of a grant by Lewisham Library.

The three sided pillar is alive with story telling ceramics, pieced together to tell the incredible tale of Olaudah Equiano, an African born writer whose experiences as a slave prompted him to become a leader in the British abolitionist movement.

Olaudah was born in West Nigeria, where at the age of 11, he was kidnapped with his sister, forcibly separated from her and never saw her again. He was shipped across the Atlantic to Barbados as a slave. From there he was shipped and traded three times. Earning money by cutting hair, he purchased his freedom and sailed across the Atlantic to London, settling in Deptford, south east of the city, and became one of the leading voices in the anti slavery movement.

He self published his own biography ‘The Interesting Narrative of the Life of Olaudah Equiano’, depicting first hand the horrors of slavery. It went through nine editions in his lifetime, helping gain passage of the ‘British Slave Trade Act 1807’, which led to entirely abolishing the trade, 10 years after his passing.

This sculpture reminded us of some of our own works around the hotels, using patchwork mosaics to tell beautiful lyrical stories.

Mimi Biarritz’s pieces are the stuff of dreams. Even the most lurid of sleeps couldn’t conjure up some of the incredible work she has produced. The unapologetic explosion of life, colour and expression is what we love about her work.

Our hotels are a patchworks of culture, history and travel. Indian sculptures sit next to English embroidery, Kirdi beaded lighting next to a Swedish armoire. This collection of stories, skills and craftsmanship from across the globe is what we have always celebrated and honoured. The individuals that make up our company, whether staff members or those whose artworks grace the rooms are vitally important and make Firmdale Hotels and Kit Kemp Design Studio what it is today.