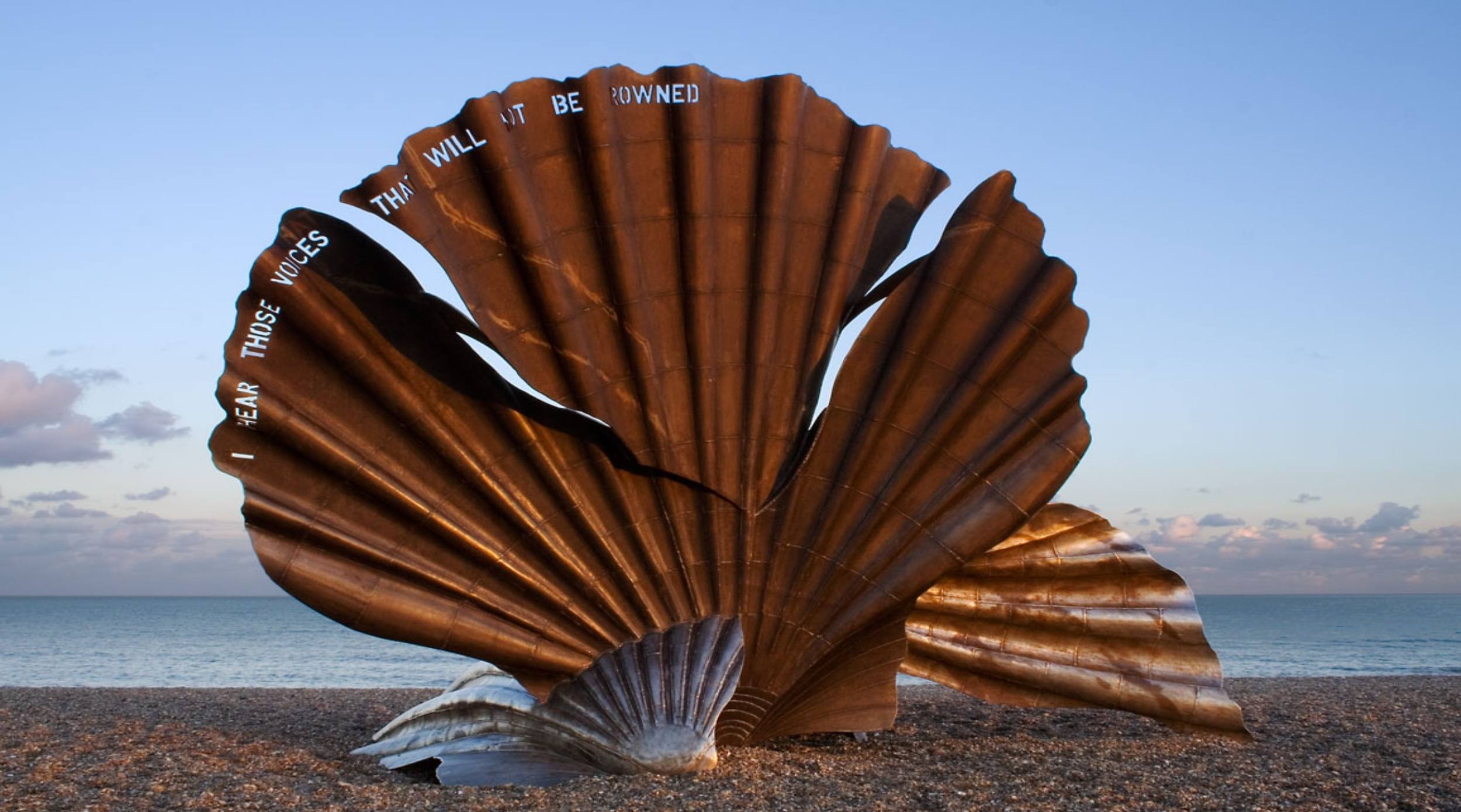 With two members of our little design team coming from the East of England, it seemed appropriate to name some of our favourite artists and makers who share this rural corner of Britain. It is no secret that the area has captured the hearts and minds of many artists over the years, tending to come for a weekend and stay for a lifetime.

The landscape is evocative and ever changing, the same one walk can look so different from morning to evening. The wind whistles off the North Sea and it is always colder here than any other part of England, but that does not deter!

This week we have uncovered some local artists and makers that have made Suffolk or Norfolk their home and personally we admire their creativity and quite understand it. This funny county on the way to nowhere inspires us too.

One of the most famous Suffolk based artists is Maggi Hambling, a painter and sculptor best known for her work, A Conversation with Oscar Wilde in London, the first monument dedicated to Wilde outside his native Ireland.

Maggi’s concept of the sculpture was chosen for its wit and humour, which seem to embody some of the characteristics of Wilde himself. It takes the form of a bench-like green granite sarcophagus, with a bust of Wilde emerging from the upper end, with a hand clasping a cigarette.

Another of Maggi’s works is The Scallop at Aldeburgh Beach, which celebrates the work of Benjamin Britten. The four-metre high steel shape is pierced with the words, ‘I hear those voices that will not be drowned’, taken from Britten’s most famous opera ‘Peter Grimes’. Maggi describes the work as a conversation with the sea.

Maggi is not often seen without a cigarette in one hand and a paintbrush in the other. She believes in the discipline of painting and sculpting each day. We admire her dedication and believe that consistency and hard work play a pivotal role in creativity.

The Family of Man is an unfinished sculpture by Barbara Hepworth, which was created in the early 1970s and unfinished at the time of her death.

The complete sculpture is actually made up of nine individual pieces. Two sets of the sculpture were cast; a complete set can be seen in the Yorkshire Sculpture Park, the remaining set being broken up into smaller groups. One of these is at Snape Maltings, an arts complex on the banks of the River Alde at Snape in Suffolk. The sculpture is on permanent loan from the Fitzwilliam Museum in Cambridge.

Barbara Hepworth was the inspiration behind the large ceramic pots which stand proudly one on top of the other in the Conservatory at Haymarket Hotel.

Jelly Hunter-Green’s work is defined by her passion for the natural world, having spent time immersed in the jungles and rainforests, from Brazil and Borneo to Sri Lanka and New Zealand. She works from her studio in Suffolk, based on an old unused airbase. Her immense large scale paintings have so much depth and mystery, you feel as though you could almost step right through to another world.

Jelly has been a student of Maggi Hambling since she was 16, travelling up to London a day each week for lessons, whilst also attending the Prince’s Drawing School. In 2009, she was selected as a member of the Royal Society of British Artists (RBA), featuring in their annual exhibition in 2010.

Jelly’s work is figurative and fantastic. The level of detail is so minute and the use of colour so sumptuous, one feels enveloped by the power of the work as you stand before it.

Her love for the natural world is amplified by the Suffolk surroundings, leading to incredible works of art depicting wild irises, woodland foliage and numerous portraits of the neighbouring cattle.

Jelly’s adventures led her to central Brazil, in a treehouse perched way above the rainforest canopy, some 11km away from the nearest village. Her time there was spent painting all that was around her, the lush aliveness of her leafy surroundings.

“I was overwhelmed by the mystery and beauty of the place”, she said.

It was after seeing the aftermath of the destruction and deforestation of the most sacred lungs of the earth that she set about painting both rain and fire. The flamed pieces are a heart wrenching glimpse at the beauty of these places being engulfed by fire, leaving nothing behind for plants or wildlife.

The Suffolk Suite at Haymarket Hotel embodies and exudes the playful nature that the wild countryside brings.

We have always been great believers in inspiration from the coast and this space embodies these details with the sandy hues and nautical navys.

We’re quite taken by this small but mighty corner of Britain. Alongside Maggi, Barbara and Jelly, some of our favourite makers you may have heard us mention before are also from the East of England, including wool wizard Colin Millington and talented ceramicist, Martha Freud.